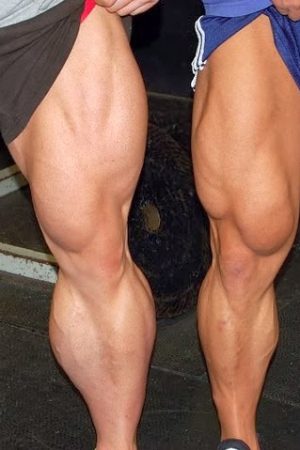 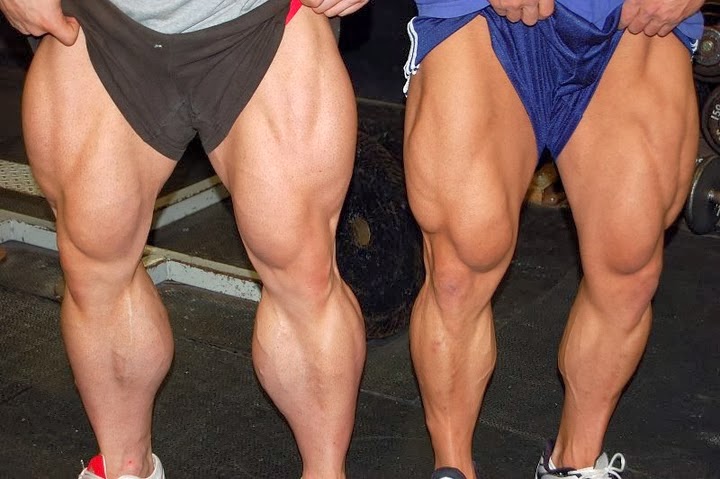 There’s a fine line between overtraining your legs and not training them hard enough. And not surprisingly, most of us fall into one of the two camps. First you have the guy who spends 45 minutes doing squats at the power rack before moving on to the rest of his hard-hitting, 90-minute quad workout. Then you have someone who thinks a sufficient lower-body routine consists of a machine-only session in which he hardly breaks a sweat.

“Most guys don’t realize that their leg training should probably be more middle of the road,” says Hollywood-based trainer Gunnar Peterson, CSCS. “They either try to do a pro bodybuilder workout once a week and end up hobbled like James Caan in Misery or do a leg extension/curl combo every three days and think they’ve trained legs. But you really should find a middle ground between the two so you train your legs with decent intensity twice a week.

Building thick, strong legs does not come easy. So how do guys like Branch Warren and Mustafa Mohammad build such huge, freaky legs? Guys like Branch and Mustafa already have incredible genes in the first place which contributes to their amazing leg growth – as do heavy training and various shocking methods.

Their workouts would often leave the average trainee dripping in a pile of sweat afterwards. Their levels of intensity have elevated them to the top in terms of leg development. On the other end of the spectrum, there are too many people who don’t even train legs in the first place. Then there are those who show up to a leg workout scared of putting that 200 lb bar on their back. When you show up to a leg workout, you should think of it as an opportunity for growth of your entire body – not as a reason for being scared.

Before we discuss the best way to build leg muscle, let’s look at their anatomy.

The upper leg (thigh) is comprised of the quadriceps, the hamstrings, and the glutes as the main muscle groups

The quadriceps consists of the rectus femoris, the vastus lateralis, the vastus intermedius, and the vastus medialis. The quads are responsible for extending your leg, which is also known as adduction.

The vastus medialis is the teardrop muscle that bodybuilders develop quite well. It can be trained the best with unilateral (one-legged) exercises such as split squats and lunges and it also responds very well to squatting past parallel.

The hamstrings, or biceps femoris, are the muscle group that makes up the back of your thighs. The hamstrings are responsible for flexing the leg, which is also known as abduction.

The hamstrings are comprised of a long and short head, very similar to the biceps. Most exercises that hit the hamstrings, except for leg curls, will hit the glutes (Gluteus Maximus and Minimus) as well.

The hamstrings can be trained in a variety of ways – including Snatch-Grip and Stiff-Legged Deadlifts, Leg Curls, and Glute-Ham Raises. Make sure that you train your hamstrings as much as you train your quadriceps to ensure a healthy balance of leg development.

The glutes (Gluteus Maximus and Minimus) are activated in almost all leg exercises and are one the strongest muscle groups in the body. Developing your glutes will go a long way for increases in strength.

I personally don’t train calves until late in the off-season but having a big set calves can be very impressive for a bodybuilder to say the least. If you do enough running and/or Plyometrics, however, you should be fine in terms of calf development.

Squats are king because they’re simply the most challenging leg movement you can do, especially when loaded appropriately. They work all the lower-body musculature (we’re counting glutes), and have been shown to spike muscle-building hormone release. In fact, we even know that squatting before doing curls has been shown to significantly improve arm strength!

Some individuals find that squats build their butts well, but they really need help building their quads. If that’s you, try front squats! By shifting the bar from the back to the front of the body, even just 6-8 inches, you change the relative amount of muscle loading that occurs. Front squats emphasize the quads over the glutes and hams, which means you’ll sacrifice some of the load.

Movements like snatches and power cleans take some serious dedication and technique to master, but they can be unrivaled when you are trying to improve jumping power or squat strength. In fact, one scientific study found a nearly 18-percent greater improvement in squat 1RM after following an Olympic-based program compared to a traditional powerlifting program.

Deadlifts and deadlift variations like sumo are considered whole-body exercises, specifically for the posterior chain, which includes the hamstrings and glutes. But there is quad activation in this movement as well, mainly observed in the sumo deadlift.

This one is deceptively difficult, partly because of balance and partly because you’re training one side at a time. The Bulgarian split squat is essentially a split squat, but your rear leg is elevated, which forces the front leg to pick up more of the workload. Try it on a Smith machine if you find it difficult to balance the weight.

Machine exercises don’t rank high on our list, because they control the pathway for you, meaning stabilizing muscles take a back seat. In addition, the hormone boost they generate just doesn’t compare to their free-weight brethren. That’s one reason to do them later in your leg-training session, when your thighs are already fatigued.

Like all the movements listed thus far, multijoint lunges require hip and knee extension, which gives you the stimulus for the thighs and glutes. They can be done standing in place, or stepping forward or backward—decide for yourself which subtle variation you prefer. You can also choose between a barbell and dumbbells.

For those of you hoping leg presses could replace squats in your leg workout, the divide between the two movements can’t be overstated. Because the leg press recruits less muscle mass than squats, it simply doesn’t generate the same degree of testosterone release.Nor is the body position here particularly functional, unless your log cabin collapses and your only way out is pushing the timber forward.

This upper hamstrings/glute exercise is unlike most others because you can really overload it. Plus, most hamstring routines focus on leg-curl movements, which center around the knee joint, but this one works from the hip joint. It’s vastly underutilized in most trainees’ workouts, another reason we believe it’s a good fit.

For newcomers to squatting, the machine squat offers a degree of safety while learning the movement pattern. (Goblet squats are great for beginners as well.) Machine movements also work well when done later in your workout, when your legs are fried and you need an assist with balancing the weight. If you’re advanced and using this as your squat of choice, you’re probably not choosing the right version of the movement. You’ve been warned!

Many people think that to build muscle you have to train every day, but that’s not the case. Muscles get stronger when they get small “breaks” in training, and get stronger when they build up again during REST days. So don’t exercise the same muscle groups two consecutive days. Rotate muscle groups so you’re training your arms, back, chest, and other areas on the days you aren’t working out your legs.

Make your leg workouts count. They shouldn’t last more than 30 minutes, but those 30 minutes shouldn’t feel comfortable. You want to go all in and maximize the workout, putting a lot of pressure on your muscles so that they break down and build back up stronger.

Each rep should be done explosively and with force, rather than slowly. Bodybuilders have found that working out explosively – quickly and with some force – helps muscles build up faster and bigger. Get through your reps as fast as possible. Time yourself to see how fast you do them, and work toward getting through your routine more quickly as the weeks pass.

Get Plenty of Rest between Workouts

Muscles get stronger during the time between workouts, when the fibers heal and strengthen. That’s why it’s mandatory to get plenty of sleep every night when you’re training heavily. On the days when you don’t work out, let yourself rest. Don’t go on a 10-mile hike or bike all day long – it’s okay to put your feet up and relax.